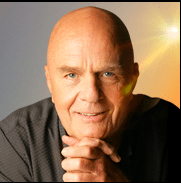 A Tribute To An Amazing Man Who Died This Week

Today’s column is dedicated to the late and very great Wayne Dyer who passed away this week. One of the grandfathers of personal development and non-denominational spirituality, prolific author and speaker, Dr Wayne influenced so many countless lives for the better.

Wayne Dyer’s work spoke volumes to me in my darkest days. And it lifts me up higher in my highest. There is so much wisdom to be found in his work that I thought you would enjoy 7 of my favourite quotes from him, I’d love to know which one is your favourite:

1. “Conflict cannot survive without your participation.”

So true. There cannot be a fight if only one person is doing the fighting. Sometimes the right thing to do is not to fight back but to withdraw your time, energy and attention completely. The conflict is starved of oxygen (attention) and it naturally goes out.

3. “What comes out of you when you are squeezed is what is inside of you.”

This is actually part of a very famous story that he tells. It’s really beautiful – I’ve laid it out for you at the end of this article.

This always speaks to me in terms of resilience and persistance. Even when we are doing what we are meant to be doing in the world we sometimes have to dig deep, and keep going – that’s what sets apart great from good.

5. “Maxim for life: You get treated in life the way you teach people to treat you.”

I write about this a lot. Essentially we train people how we like to be treated. If we are being treated badly then it’s because we have allowed that to happen by not setting boundaries or removing ourselves from the situation. What we allow is what we endorse.

6. “Your children will see what you’re all about by what you live rather than what you say.”

Kids are smart. They know actions talk a lot louder than words.

Ah, this is so very clever. To encapsulte the whole teachings of the Law Of Attraction into just one sentence. To turn around the old maxi “’l’ll believe it when I see it” into the alltogether more positive and profound “I’ll see it when I believe it”. When we have absolute belief in something then the universe conspires to make it reality.

And the story about the orange? Quite magical and beautiful, here it is from one of his lectures – enjoy. And RIP Dr Dyer – you were the most incredible teacher.

“I was preparing to speak at an I Can Do It conference and I decided to bring an orange on stage with me as a prop for my lecture. I opened a conversation with a bright young fellow of about twelve who was sitting in the front row.

“If I were to squeeze this orange as hard as I could, what would come out?” I asked him.

He looked at me like I was a little crazy and said, “Juice, of course.”

“Do you think apple juice could come out of it?”

“What about grapefruit juice?”

“What would come out of it?”

“Why? Why when you squeeze an orange does orange juice come out?”

He may have been getting a little exasperated with me at this point.

“Well, it’s an orange and that’s what’s inside.”

I nodded. “Let’s assume that this orange isn’t an orange, but it’s you. And someone squeezes you, puts pressure on you, says something you don’t like, offends you. And out of you comes anger, hatred, bitterness, fear. Why? The answer, as our young friend has told us, is because that’s what’s inside.”

When someone puts the pressure on you and out of you comes anything other than love, it’s because that’s what you’ve allowed to be inside. Once you take away all those negative things you don’t want in your life and replace them with love, you’ll find yourself living a highly functioning life.

Thanks, my young friend, and here’s an orange for you!”

You can get my book “101 Self Care Ideas that are not “drink more water or have another damn bubble bath” for just $17 (instead of $29) today.
Grab it here. It’s pretty. You will love it.
PrevPreviousWelcome to the Complaints Department
NextThriving Versus ArrivingNext