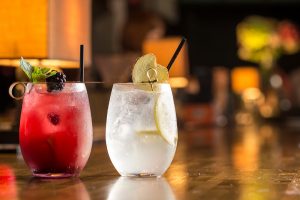 I am secretly a Harry Potter junkie. I love what J K Rowling has achieved. I love that her first advance was just $1500 and she was rejected by over a dozen publishers. I love that she had faith in what she was doing and that she is now worth gazillions. I love that she has encouraged children away from the PlayStation and rekindled a love of books.

One of my favourite bits is in HP and The Half Blood Prince. Harry wins a vial of highly coveted Liquid Luck “one sip and all your endeavors will succeed”. When he uses it he weaves his way artfully through a seemingly impossible situation because “ I’ve got a good feeling …this is the right thing to do…” even when the actions he is taking seem inexplicable to all around him, including himself.

What I find even more fabulous is when Harry pretends to put the Liquid Luck into Ron’s drink before an important Quidditch (sorry, broomsticks etc, I know, bear with me) game. Ron thinks the Liquid Luck is coursing through his veins, his nerves dissipate and he plays the game of his life. Fearless, inspired, audacious, going for shots that he would never have ordinarily attempted. What makes the difference is that he has the belief that he cannot fail. He just trusts his instincts and lets fly. He plays big.

Of course nothing has really changed, it’s just the belief in his own abilities and that he simply cannot fail that’s changed. It’s not a change in circumstance or skill, merely a change in belief and hence attitude.

I like to remember this when I am launching a new project of some sort. What would I do, how would I feel if I thought failure was impossible? If I had drunk the Liquid Luck, how would I behave? It inspires me to play bigger, to take risks and to try new things.  It allows me to act much more on gut instinct…what just feels like the right thing to do? Even if it seems illogical. What if I simply couldn’t fail?

Have a think about any area of your life where you are playing small. Imagine you have some Liquid Luck on call that with “one sip and all your endeavors will succeed”. How would you act, what would you try/do/be if you knew you simply couldn’t fail. If you knew everything would go your way? What would you dare to do to play bigger?

The secret of course is that you don’t need the Liquid Luck to make that happen. You just need to tap into that lucky feeling and play big.

There is a famous Thomas Jefferson quote that says “I’m a great believer in luck, and I find the harder I work, the more I have of it”.

I disagree. I don’t think luck is purely dependent on hard work. I think its mainly about state of mind. I also think it’s a bit more magical than the Jefferson suggests! I prefer Tennessee Williams attitude “Luck is believing you’re lucky”