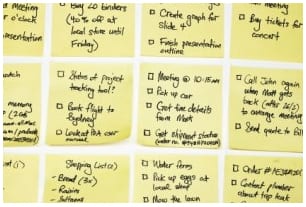 Procrastination is such a thief of energy. That horrible “something is hanging over me feeling” when, lets be honest, we would feel soooo much better if we just got it done already. I’d love to say I don’t procrastinate, but I have my weak moments too – these are my go to inspirations to move me out of inertia and into action. Grab your To Do list and let’s create some momentum:

1. “Nothing is so fatiguing as the eternal hanging on of an uncompleted task.” —William James

Good to know that procrastination was an issue back in James’ day – even before the interwebs and Facebook there was still a tendency to put things off. Just as much of an energy suck even before Pinterest was invented. For maximum energy pick three things you have been putting off. Cross one off the list forever – just decide – hell, I don’t care, i’ts just not going to happen. One – delegate it somehow, pay someone, bribe a small child, whatever it takes – get it done. It won’t be perfect but at least it will be off the list. And the third one – suck it up buttercup – get it done. Just get it done so you can release back all that energy into your system.

2. “To think too long about doing a thing often becomes its undoing.” —Eva Young

As does thinking it needs to be “perfect”. Sometimes just starting, and getting it done is enough. When we wait for too long we can lose the momentum completely. Perfectionism kills countless plans and splendid ideas. Pick something low risk on your To Do list and get it done, not perfectly, just done, crossoffably done. Feel the relief. Move on.

3. “It is an undoubted truth, that the less one has to do, the less time one finds to do it in.” —Earl of Chesterfield

The most productive people I know are working mums. What they pack into a day blows my mind. The less time they have the less they procastinate. The more time we have the more we can dither about endlessly…sometimes the perception of “not having enough time” can be a real plus.

Can you give yourself a “fake” deadline to get yourself motivated or get an accountability buddy who will call you on your endless deadline creep? By reducing the time, can you light a fire under your butt to make it happen?

Have you noticed that? The longer you leave it the harder and more impossible and boring and awful it seems? Biting the bullet and being disciplined keeps an easy job easy, it’s all the dilly dallying that often makes it hard, not the actual task itself.

5. “There are a million ways to lose a work day, but not even a single way to get one back.” —Tom DeMarco and Timothy Lister

6. “Someday is not a day of the week.” —Author Unknown

Riggghhhht. Nor is “later” or “when I get to it”. Good to know, right?

This is so true. The time is NOW. That’s all we ever really have. So – whatever it is…starting to write your novel, spending more time with your mum, learning to pole vault, taking up Spanish, cleaning the gaddan windows – whatever it is – all we really have is today. So – if it’s important, really important to you, make it happen. If it’s not important – well, don’t sweat it, just cross it off the list and clear it from your mind – that way you free up your energy to deal with taking action on the stuff you really value.

How’s that to do list looking now?  Let me know in the comments below.

You can get my book “101 Self Care Ideas that are not “drink more water or have another damn bubble bath” for just $17 (instead of $29) today.
Grab it here. It’s pretty. You will love it.
PrevPreviousHigh Quality Yes. High Quality No.
NextWhat You Should Know About Changing Your LifeNext